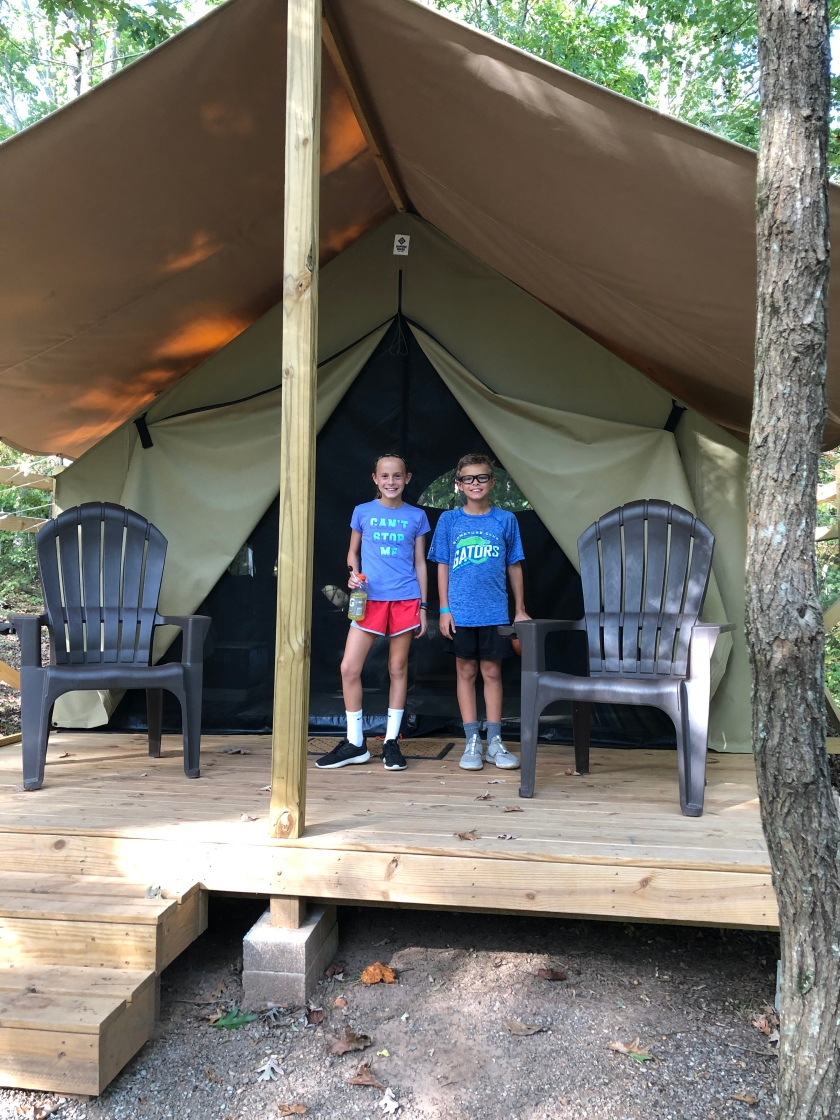 Did you read about Part 1 of our fall break in Asheville?

Part 2 of our Asheville trip entailed glamping. By last Friday afternoon, we were settled into our tent and sipping on White Claws while the kids ran around. I was really pleased with how nice the facilities were and the area was so pretty. Like I said, we’d be to Asheville many times and even hiked in different areas like Chimney Rock, but Pisgah and Lake Powhatan were new to us. My friend Krista found this location, and the pictures online certainly do it justice.

After a little while, we decided to hike down to the lake. It was a little over a mile or so, and it was good for the kids to run around and for us to get our bearings. We were gone a little over an hour and then decided to make dinner.

After we returned from getting the lay of the land, we started dinner. We were hungry and didn’t give our fire time to roar, so we ended up having hot dogs and hamburgers rather than the original plan of the foil packs with chicken and potatoes. Then, it was time for s’mores and ghost stories.

This is going to sound stupid—but I didn’t realize how dark it would be…and so early. Thank goodness for our flashlights and lanterns…but even still, we were in bed by 9:30.

I woke up to this view the next morning…and a huge dip in temperature!! Friday was in the 80’s and Saturday was in the low 60’s and a drizzle rain most of the day. I am a fan of the fresh air, but I also am wise enough to pack my allergy medicine!

I spent a few minutes on the porch sipping my coffee before we got the day started.

Travis went on a trail run #showoff while the moms read , and the kids ran around and then played games. Go Fish for the girls and Chess for the boys!

Just a few pics of our manly men manning the fire as well as some of our food. Saturday morning breakfast included sausage, bacon, and pancakes on the cast iron skillet. #howdidthepioneerwomendoit ?!

After breakfast, we all went on about a 3 mile trail hike and ended with us by the lake. The evening before, we went to the fishing pier, but that morning we ended up on the beach. The kids were so awesome on the hike! They were usually way ahead of us and in charge of the map. We stayed on the blue trail, and they had fun finding the mile markers.

After the hike, we cleaned up and headed to Asheville to have a late (3:00!) lunch at the Wicked Weed Brewery. We usually go there when we are in Asheville, and the food, beverages, and atmosphere never disappoint. Hadley went to check on a table option while we waited, and I ended up checking on her…what was taking so long was she had found the free pretzels and was stocking up for the rest of us while we waited. haha

After lunch, we walked around for awhile and even ended up getting coffee and hot chocolate before heading back to the camp site.

We were all pretty full from lunch, so we just ate snacks and more hot dogs for dinner followed by more s’mores and ghost stories. Then, again, another early bedtime of 9:30 or so.

We woke up the next morning around 7:30, packed up, and left by 9:00. We had fun but were ready to get home, start laundry, see Homer, and sleep in our own beds!

I’ve only been camping one other time (besides my Girl Scout days when I was in elementary school) When Travis and I had been dating for almost a year, we went camping for one night near Columbia, Missouri where we lived. We had a great time, but even then, with just the two of us, it took so much effort, planning, and packing! I’ll never forget as we drove home from that camping trip in the spring of 2002, he turned, looked at me, and said, “You passed the test!” haha…Listen, I’m not high maintenance, and he (and my friends and family) know that…I love the outdoors. I will hike, bike, paddle board, etc…eat hot dogs, s’mores, and all the things…I just prefer to sleep at a Marriott! I struggle with needing to be in control, and it’s hard to control all the things in nature, so it takes me a minute to let that character trait of mine go. That being said, I would definitely do this again. It definitely did take a lot of planning and preparation (and I think my friend did most of that!!), but the effort was worth it in the end. It was a great as a family to unplug for awhile, let the kids run around, and see what the world has to offer. And, it was certainly fun to go with another family who we are great friends with!

These memories will last a lifetime, I’m sure!

I hope you have a great weekend,